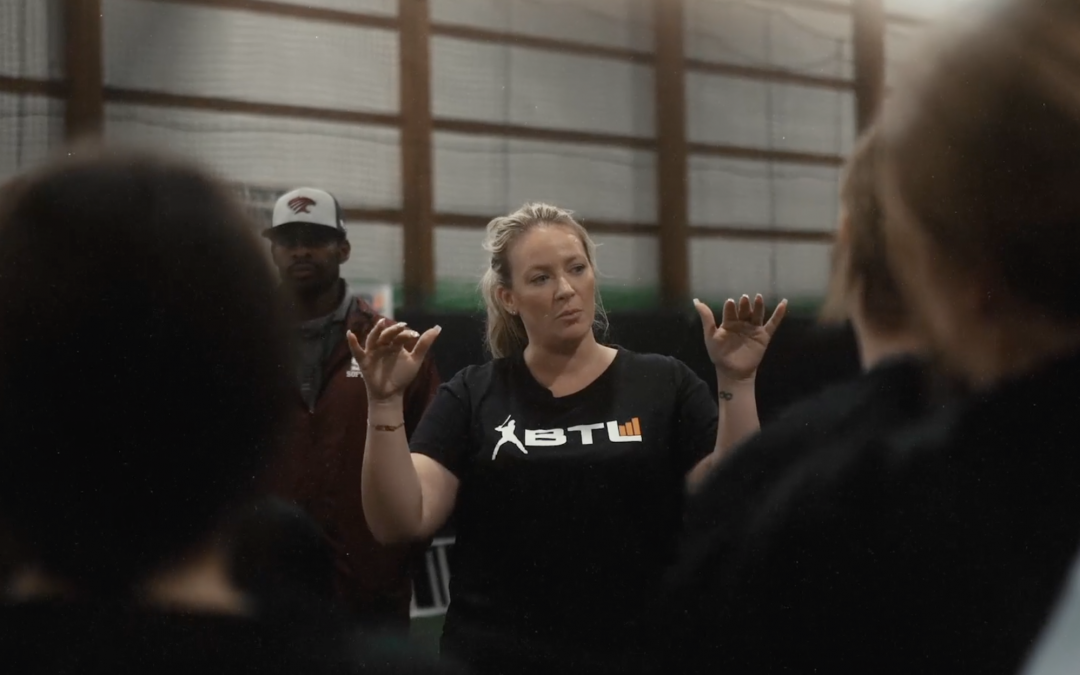 BTL held their first ever softball showcase on January 30th in Cottleville, MO, with 27 uncommitted high school athletes getting the opportunity to perform in front of over 20 collegiate representatives watching remotely. Below is a look at some of the performers that stood out the most at the showcase.

Starting off her day in the field, Hakenewerth was quick on her transfer from the glove to the throw, her throwing velocity topping out at 48 mph. On her 20-yard dash, Hakenewerth achieved the fourth fastest time at the event with a 3.16. During her round of BP, the right-handed hitter showcased an aggressive yet controlled swing, her hands remotely quick to the ball and her bat remaining on plane, leading her to a max exit velocity of 65 mph. On the mound is where Hakenewerth stood out the most, the numbers for her four-pitch arsenal standing out as some of the best at the event. Her fastball reached 61 mph and 992 rpm, her curveball reached 52 mph and 1247 rpm, and her screwball reached 58 mph and 1223 rpm, all of these numbers either being the best at the event or very close to the best. Against live hitting, Hakenewerth struck out five of the nine hitters she faced off against, getting ahead early in the count and effectively mixing up her pitches throughout the at-bats.

McFerren moved well in the field, being aggressive towards the ball and showing off a strong arm that got up to 54 mph on her infield velocity. McFerren ran a 3.38 on her 20-yard dash, a solid time relative to her power.  The switch-hitter elected to hit from the right side of the plate, her round of BP home to the highest exit velocity at the event at 69 mph. McFerren’s swing sees her start tall with her hands up high, getting into her legs during her swing and dropping the hands to bring through the zone. In her at-bats against live pitching, McFerren had a couple of solid pokes to both sides of the field, piecing together some good ABs throughout.

In the outfield, Reinebach paired some fluid mobility and a powerful arm, her 58 mph outfield throwing velocity being the best at the event. Her 20-yard dash time was also one of the best at the event, finishing her dash at a 3.18. Reinebach’s stance is a tall, tight one, her feet close together and her hands about level with her shoulder close to the body. Her stride is short and her hands are quick, her swing consistently remaining on plane with the ball to allow for repeated line drives up the middle and a max exit velocity of 64 mph during her round of BP. Hitting live, the switch-hitter had one of the harder hit balls on the day, shooting a line drive to the right side of the field.

Strother’s footwork on the infield stood out amongst the others, setting herself up nicely to make an easier and more accurate throw, her throwing velocity topping out at 51 mph. Remaining on the topic of footwork, Strother also had a solid 20-yard dash, her time clocking in at 3.31. Strother remains still in her stance that sees her front knee bending inward and her hands up around her ear. Strother’s swing is a fluid one, doing a good job of driving her hands through the ball and finishing the swing. Strother found success going up against live pitching, all of the righty’s at-bats resulting in solid contact with a good launch angle. On the mound, Strother displayed a four-pitch arsenal consisting of a 53 mph fastball, a 52 mph curveball, a 36 mph changeup, and a 54 mph mph riseball, her riseball velo the best at the event. Now on the pitching side of live, Strother’s success carried over, striking out three of nine batters faced while mixing up her pitches well and staying in the zone.

Behind the plate, Stickman was smooth with the glove, on the block, and on the throw down, earning a pop-time of 2.12 and a catching throwing velocity of 55 mph, both of which being the best in their separate categories. Stickman was solid in the field as well, carrying her powerful catching arm over to the infield to attain a throwing velocity of 58 mph, the highest at the event. For her 20-yard dash, Stickman finished at 3.75. The righty stands upright in her stance with some slight bend in the knees, her back elbow pointed back with her hands next to her ear. The swing itself is a long, aggressive one, the bat whipping through the zone but still remaining flat. Catching live pitching, Stickman did a good job of winning pitches for the pitcher, doing a very solid overall job with her frame work. Squaring off with a live pitcher, Stickman had a good deal of success, finding the barrel a couple of times for some very solid contact.

Scales kicked her day off behind the plate, where she got a pop time of 2.21 and a throwing velocity of 51 mph. On the 20-yard dash, Scales achieved a time of 3.64. Scales then headed to both the infield and outfield, displaying fluid movement and a quick transfer with a solid arm, reaching up to 51 mph in the infield and 52 mph in the outfield.  Her stance begins both wide and very open, taking a long stride forward before bringing the bat through the zone. Her round of BP was one of the better at the showcase, consistently hitting the ball on a hard line to the whole field. Scales did much of the same during live, connecting with a couple hard hit line drives. What stood out the most when Scales was catching live pitching was her leadership and communication, being able to work well with the pitchers and showing the respective pitcher her support throughout.

Reinebach looked comfortable with the glove in the field, moving smoothly and quick to release the ball, her throwing velocity hitting 50 mph. She had one of the fastest 20-yard dash times at the showcase, her 3.12 good for the second best at the event. Reinebach has some inward bend on her front knee to begin her swing, straightening it out during her long but quick stride. The righty’s round of BP was a quality one, spraying the right side of the field with some strong line drives, her best exit velocity getting up to 62 mph. She was aggressive early in the count during live, getting ahold of a couple early pitches and driving them to both sides of the field.

One of the quickest in the field at the event, Reinebach attacked the ball and was very fast on the transfer from her glove to her throwing position, her max throwing velocity hitting 49 mph. Reinebach was also one of the faster runners at the showcase, getting a 3.25 on her 20-yard dash. The right-hander’s stance is a pretty unique one, starting with her front foot facing towards her back foot and her back elbow about even with her shoulder, her hands close by her ear with a bit of movement to them. Reinebach does a good job of getting into her legs during her swing with a knee-to-knee type load that helps her keep momentum through contact. Her round of BP saw a good deal of line drives to her pull side, her hardest hit achieving an exit velocity of 61 mph. She strung together some quality at-bats against live pitching, a good eye and plate discipline being the main takeaways from these plate appearances.

Receiving throws at first base, Wegrzyn showcased some solid athleticism and was able to snag some errant throws. On her infield velocity, Wegrzyn topped out at 51 mph, and on her 20-yard dash, she finished with a 3.75. The right-handed Wegrzyn starts her stance off open and with her bat just above her shoulder, closing off and bringing the hands down through the zone during the swing. Most all of Wegrzyn’s Blast Motion numbers were near the top of their respective categories for the event, a bat speed of 56.1, a hand speed of 19.6, and a rotational acceleration of 18.7 being the notables. Her round of BP was one of the louder ones at the event, connecting with several hard hit line drives throughout the round. On the rubber, Wegrzyn hit some nice velos on all her pitches, most notably her fastball reaching 59 mph and her curveball reaching 57 mph. Facing live hitters, Wegrzyn struck out two of the six batters she went up against, getting weak contact from the remaining four hitters.